Backcountry skiing: new bid to tempt fans on to a slope less travelled 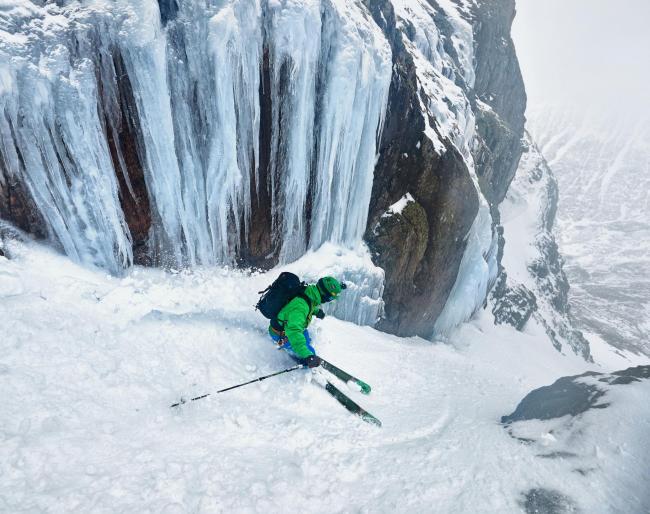 Scotland’s remote slopes are set to be the focus of a new campaign to attract snowsport fans, finds Sandra Dick.

A sprinkling of snow dusted the summit of Cairngorm Mountain earlier this month, sending hopes soaring that the lucrative winter sports season is within touching distance.

As pretty as it looked, for a rising number of ski and snowboard enthusiasts, it’s not the thought of tackling the resort’s finely groomed pistes or achieving a perfect run down the White Lady that is setting hearts racing and the blood pumping.

Backcountry skiing – exploring untouched mountain areas away from the resort runs and tows – has been rising in popularity in recent years.

Now in an effort to persuade far more winter sports fans to discover what Scotland’s less travelled snow-covered slopes can offer, Snowsport Scotlandis set to launch a major drive highlighting the spectacular scenery and adrenalin rush that comes from exploring beyond the beaten track.

The sports body has engaged a cohort of backcountry ambassadors including Winter Olympian and professional snowboarder Lesley McKenna and Jonny Barr who runs the Cairngorm UpBattle splitboarding event, to help showcase Scotland’s adrenalin-pumping but rarely tackled snow-covered slopes – some in striking distance of the country’s bustling resorts, others just a short distance from the heart of central belt city centres.

A series of inspiring blogs and motivational short films is planned to inspire adventurous snow lovers to broaden their horizons, while at the same time creating a thriving network of Scottish backcountry enthusiasts who can share experiences, routes and support each other on the hills.

The move comes as hopes run high that the pandemic’s impact on international travel will see skiers and snowboarders who would normally book an Alpine holiday, opting to visit Scotland.

On the other hand, however, a rush to the Scottish hills – not unlike that seen as lockdown eased and tourists flocked to enjoy the great outdoors – could also see high demand for limited amounts of rental ski and snowboard equipment and tuition, even longer queues at tows on the slopes and pressure on car park spaces, particularly at peak periods such as weekends and during good weather.

Encouraging skiers and snowboarders to explore less familiar slopes would ease some of that pressure, particularly at Cairngorm Mountain, where £16 million worth of repairs have started on the troubled funicular railway two years since it closed due to structural problems.

Euan Baxter of Snowsport Scotland, who is leading the backcountry campaign, says: “Scotland has fantastic winter landscapes. We have five resorts but there is much more.

“There are areas of mountains and hills which can be accessed, and we want to encourage people to go and experience Scotland’s landscape and environment.

“It’s not necessarily about skiing steep slopes or trying to get to remote places,” he adds. “It’s also nice to experience going to the Pentland Hills, or Torridon in the north west, or different parts of Cairngorm.

“It’s about going where there is snow and taking advantage of it.”

The term ‘backcountry’ covers various genres of skiing and snowboarding which take place outside a traditional ski resort area. Some will use resort tows to reach neighbouring gullies beyond groomed areas, others use skins on skis or split snowboards to ‘ski’ uphill or tackle demanding climbs using crampons and ice axes before skiing back down.

Some will camp overnight on the hill, while increasingly motorhomes and campervans are being used to travelbetween hills so enthusiasts can ‘bag’ routes, similar to munro bagging.

However, because the nature of backcountry skiing means they are exploring remote and unmonitored areas, the Snowsport Scotland campaign will emphasise the need for training and safety knowledge and has partnered with Glenmore Lodge in the Cairngorms and other mountain bodies to highlight training courses and safety information.

Alison Thacker who runs Off Piste Performance with husband James, specialising in private ski tuition and touring in Chamonix, Scotland and Norway, says safety is paramount.

“You have to have some avalanche awareness knowledge, navigation skills, and hillwalking skills such as knowing what to take in your rucksack, what time it will be dark, what is the weather doing?

“Someone used to skiing on a piste, might not have those.

“In a ski resort, if you fall and break a leg, the ski patrol will help you. If that happens when you have no phone signal or means of communication, that could be a serious situation.”

She believes the Scottish hills are set to be busier than in previous years, but some may struggle if they don’t plan ahead.

“We have a few clients who have all their ski equipment stored in the Alps. There’s not the hire capacity in Scotland, shops don’t have an unlimited supply so people who usually go to the Alps and hire their kit might not have the option to do that here.”

The appeal of leaving the resorts’ busy slopes behind is obvious: no noisy crowds, spectacular scenery and fresh powdery snow, she adds.

“There is always a lot of sound on a ski resort. If the lift stops, you know about it. And the snow is completely different. Ideally you are looking for a nice, powdery snow or spring snow, and making those first tracks.”

“This is likely due to more exposure online like the British Backcountry group which has 13k members now), better forecasting, improved lighter equipment and a desire by alpine skiers to have more options when searching for good conditions.

“There are a lot of strong skiers and snowboarders in the UK and many take one holiday a year abroad. With travel being less appealing, I would expect some are considering Scotland as an alternative.”

“Skiers and snowboarders looking to challenge themselves, or to simply cover more ground, are looking beyond the resorts and to Scotland as a whole.

“Touring opens up endless options and almost every Munro becomes a possible destination on the right day.”

Busy days at popular ski resorts are when backcountry skiers are most likely to head off the beaten track, he adds.

“If we have snow to low levels and blue sky forecast on a weekend, then the resorts will have full car parks and busy lifts. These are the days that you want to be on Ben Lawers touring, not at Glencoe queuing.”